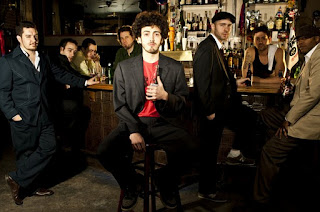 FUNK FEST! Urban Sun plus Biscuits & Gravy, Yellowcake, Universal Funk Order , Bryin Markey’s Ghetto Folk, and Down to Everything are performing on January 21st in Sullivan Hall.
Buy tickets HERE
The show kicks off with Down to Everything at 6:30pm, which started as an idea between four longtime friends in 2010. Lead singer and guitarist Mike Jazz brought a few songs he had written almost a decade ago to the band. The moment all four band members played their first song together, something incredible happened. Pure, sick tight energy was spawned. (more info here)
Bryin Markey’s Ghetto Folk at 7:30pm
The Urban Virtuoso…Ghetto Folk is the definition of originality in today’s musical society… Acoustic driven Melodic storytelling , is accompanied by abstract textural guitar , fusion inspired percussion, piano, smooth groove bass , and piercingly familiar vocals, Singer/Songwriter Bryin Markey will send you into a pure state of musical appreciation…
(more info here)
Universal Funk Order (performing at 8.30 pm)
An 8-piece, all-original funk band from Newark, Delaware. Their music is a force of energetic and powerful rhythms and melodies that are intriguing to the ears of any appreciator of music; young and old, hence “universal”. Guitar, bass, drums, saxophone, trumpet, trombone, supremely soulful vocals, and a whole lot of passion are the ingredients that Universal Funk Order contains to make a party happen wherever they go. (more info here)
Yellowcake at 9:30pm
Diversity is the key ingredient to the Yellowcake sound. With music that transcends culture, style and language, from the cross-genre melding of Latin rhythms with funk grooves to the group’s unique combination of musicians, this NYC band is putting a global pulse on the city’s music scene. (more info here)
Biscuits & Gravy at 10:30pm

They fuse the soul of Motown, the raw energy of funk, and the drive of hip-hop to bring listeners a sound that is all their own. (more info here)