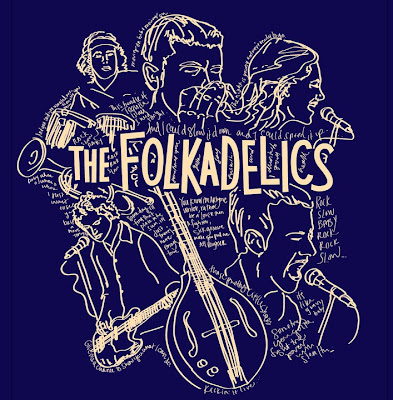 Remember super fun NYE night with the Folkadelics at Sullivan Hall? You have an amazing opportunity to have as much (or even more) fun with them again!

The Folkadelics’ music is a unique blend of rock, reggae, hip-hop, and funk, led by four-part vocal harmonies. Blurring the lines of musical genres, it is impossible to not jump up and dance along with the music when the Folkadelics take the stage.

Mercury Landing
Mercury Landing is metaphysical rock music for your soul and spirit. With their home in New York City. Their sound features diverse, dexterous, and driving songs ranging from classic rock influences, to synth-infused dance beats, to latin and world music. Their live show is accentuated by dualing guitars, tight vocal harmonies, and rhythms that unwind your desire to dance. The band thrives on its originals but likes to throw in a variety of uniquely arranged covers that keep an audience absorbed. Some of their favorites include the Beatles, Talking Heads, Led Zeppelin, and Megaman 3 (NES-Capcom circa 1990).

Frank Viele and The Manhattan Project calls itself a family and they lean on each other to make sure each song has that spontaneous spark that gets a crowd up on their feet. “There’s a lot of pride in our music,” says drummer Mario Capodiferro, “so we’re always going to give audiences an even better twist on what they thought was great.”
Love In Stockholm

Representing five states and seven instruments among them, this Rock ‘n Soul band has called Boston home since their formation in September of 2006. Raised in the house parties and dive bars of Allston, the band even has a song that bears the namesake of the town they love. They soon gained a reputation for their wild live performances, complete with blasting horns and frontman Charlie Rockwell’s guttural wail.